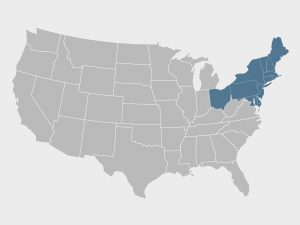 is one of five Regional Associations of RDA composed of pre-professional non-profit dance companies, troupes, ensembles, and guilds in the Northeastern United States. RDA/Northeast was the second Regional Association for dance established in the US, having hosted our first Festival in 1959. Today, we continue to provide a source of support, encouragement, experience, knowledge, and networking for our member companies. We foster opportunities for dancers, choreographers, and directors to encourage the growth of quality dance in our area.

May 26 – 28 in Harrisburg, PA
At the Hilton Harrisburg and Whitaker Center for Science and the Arts

In 1960 George Balanchine attended the second Northeast Regional Festival in Erie, PA. He was moved by the enthusiasm of the twenty companies in attendance and by the interest in ballet generated by the Festival itself. In 1961, Balanchine accompanied Diana Adams, the Festival Adjudicator, viewing the companies in attendance both in class and in performance. Lincoln Kirstein attended the third Northeast Regional Festival, this time held in Dayton, Ohio.

In the summer of 1961 Josephine Schwartz took the lead in organizing the first Craft of Choreography Conference (now RDA’s National Choreography Intensive) at Keystone Junior College (now Keystone College) just outside of Scranton, PA. Ms. Schwarz, who had danced professionally with the distinguished modern company Humphrey-Weidman Company, brought a major asset of modern dance to the Choreography Conference:  an emphasis on the making of dance. Up to this time most dance faculty had primarily been staging and adapting existing works. The Choreography Conference grew out of a need for more original choreography.

In 1973, the National Association for Regional Ballet (NARB) was incorporated as a nonprofit organization in New York, joining the five Regional Dance organizations across the country. The National Endowment for the Arts awarded NARB its first major grant in 1972, and a New York office was opened with Doris Hering as the first executive director. With the regional dance movement taking flight, the 100th Regional Festival took place May 25 – 29, 1983 in Poughkeepsie, New York, hosted by Mid-Hudson Ballet at Vassar College and the Bardavon. In 2007, the second ever National Festival took place in Pittsburgh, PA with over 2,000 attendees.

RDA/Northeast
Regional Board of Directors

Professional Companies that began as members of RDA/Northeast:

Have a question, comment, or suggestion for RDA/NE? Let us hear from you.